This script creates and maintains VEEAM Zip Backups of virtual machines hosted on a single Hyper-V server. It is useful for test environments and fully functional with the VEEAM Free edition.
You have the ability to do some versioning of your backed up machines as the script takes care of a retention period. Also it uses the VEEAM backup encryption to encrypt the backups. To ensure data consistency a sha512 checksum is created of each created backup file.
The script is designed to backup all machines that are in the state "Running" in Hyper-V for machines that are set up to non-production checkpoints it shuts down the VM before the backup.
It creates a folder structure for each backup taken. By default this structure uses the format yyyyMMdd below the base folder.

This script "Get-FileMetaInformation" returns either all available meta information of a given file. Or it returns the value of a specific meta entry of the given file. 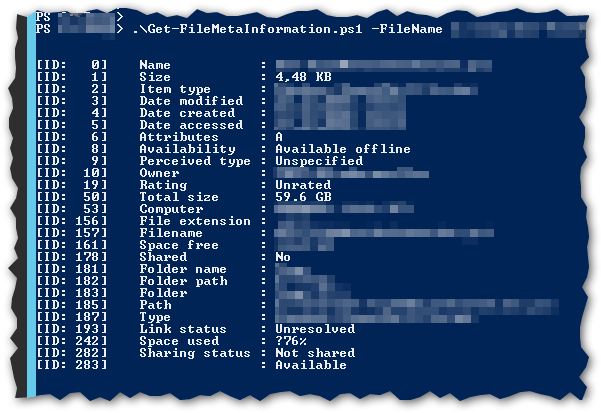 The second script "Find-DuplicatesFromHash" is able to search for sha hash files in a given folder structure. Afterwards it compares the hashes and displays duplicates if they are present.

The new version of the script has beside some additional bug fixes and the implementation of a progress indicator while collecting folder permissions the advantage to also create a csv file based report of folder permissions to easily display permissions within Excel for example.
The csv files are enhanced by a special column that can be used by the new script Modify-MailboxFolderPermission which will be released within the next few weeks.

New security article about worst usernames to use is online

This article shows up a list of unauthorized usernames that were used to initialize a connection to an internet facing Windows Server. So this is a List of usernames you should NOT use for such a system...

A new script in the section GALSync is released. This one can be used for one or two way syncronisations between two active directory forests without exchange servers present.

The new section GALSync is open again with the first version of the scripts final tested and verified.
The GALSync scripts can be used to synchronise Active Directory and / or Exchange contacts in a variety of different scenarios. For example a company purchases another company and a quick two way contact and mail address synchronisation is required you can use the already published version of the script Exchange to Exchange. The next version that will be released is a one way Active Directory to Active Directory sync.
If other versions then the already published versions are required please feel free to >> contact me maybe there already exists a script that is not yet published…

This script will create checksum files for individual files or one file that contains all chacksums of a given path (including subfolders) Supported algorithms are MD5 SHA1, SHA256, SHA512. (SHA256 and SHA512 depend on the OS version you run the script on)

This script can verify checksum files. In the default mode it scans a given path for hash files and verifies them. But also combined files with a lot of hashes can be verified

This script can archive files and folders to zip / 7z files. Before archiving the files it can create hashes on the files so the integrity can be verified afterwards. (7z executable is required).

The new version has improved logging functionality and some bug fixes:

This script walks through all users within an active directory domain and checks whether the user is or was direct or indirect member of a protected group within AD DS. Afterwards it verifies if the user is still in this protected state or if the flag is orphaned.
With this analysis you have to options to just enable inherited permissions for all protected user or you can disable protection for users that have an orphaned protection flag set.

This script sends out mail notification to users when their password is about to expire. It provides a html based message to the users where you can place company specific information
to reset password. If a used has no mail attribute specified an alternate admin recipient can be specified that receives notifications for those accounts so at least an admin is informed.
The script can be used with parameters however it is easier to modify the parameters inside the script and copy it if there are different settings required.

This script quickly creates an overview of you ADDS environment. It shows up Forest and domain functional levels, FSMO role holders and domaincontrollers assigned to an ADDS site.

This script can archive files and folders to zip / 7z files. Before archiving the files it can create hashes on the files so the integrity can be verified afterwards. (7z executable is required).

The new version has some minor improvements and can now be executed within a pipe.
In addittion it is also possible to append the output so only a singele finle contains all permission trees.

This script creates a html based report. Each folder within a given mailbox gets displayed within a tree view.
If there are permissions set to this specific folder they get displayed below the foldername.

this page resides in the net for more then ten years without any bigger changes right now.
My plan is to publish some mor ore less useful PS scripts and some knowledgebase articles all arround Microsoft technologies I fight with all day long here.

The old stuff is still around here but maybe very outdated. Depending on how much time i have an additional plan is to recycle the ADMGM tool which was originally written in C as a PowerShell "Application".